One of the world’s most coveted illustrators recently made a stopover in Basel.

A pair of socks, with a few ink lines transformed to a hungry dinosaur; a cyclist sketched on a taxi window filmed on his ride through the big apple, a portrait made of beard stubbles.

Add to that normal illustrations and vivid aquarelles from various destinations around the world.

To define Christoph Niemann, who has made more than 20 covers for The New Yorker, is not an easy feat.

His richness in methods is a conscious decision in order to be as wide as possible, using the methods and materials demanded by the feeling he wants to transmit.

However they all have something in common. Whether using a pen, cookie dough or potato print, the illustrations are about reduction to the max, like when he is able to use only one or two Lego blocks to illustrate either a taxi, a piece of sushi or the Flatiron building. And they all contain the absurdity of life, love and Niemann’s self-confessed agony of creation. 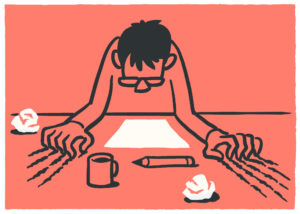 In May Christoph Niemann held the opening speech for the on-going exhibition »Living in a Box: Design and Comics« running until 20 October 2019 at the Vitra Schaudepot.

In this exhibition the Vitra Design Museum together with its curator Erika Pinner explores the world of comics and their relationship to design. As you might know, Berlin-based Niemann is no stranger to the Basel audience.

In 2017, he exhibited at the Cartoon Museum in St. Alban-Vorstadt and illustrated the cover for Vitra’s coveted Hello Robot exhibition.

During Niemann’s presentation, enriched by a slideshow, I am completely floored by his imagination. How he combines everyday objects with seemingly simple lines, and then photographing them for the final illustration.

A couple of bananas become a horse’s arse, a poppy seed bun becomes a stubbled cheek, an espresso cup a sleepy head.

He is equally comfortable with aptly depicting morning fatigue as well as heavier subjects like Guantanamo, Donald Trump and war. If you can sense an American theme here, that is correct.

Niemann used to live in New York, which gave him several American clients, including Herman Miller, Google, The New Yorker and MoMA. 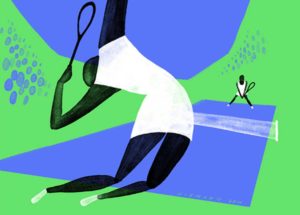 One example is the black and yellow The New Yorker cover of the New York subway. The iPad version makes it possible to turn it around in all directions, enabling you to follow the city from a subterranean rush hour towards the lofty peaks of the skyscrapers piercing the sky. Another one, custom made for VR-headsets, is a politically charged reportage-like story from the border between South and North Korea.

Last but not least, the dinosaur sock can also be read as a subconscious (?) flirt with his childhood, since one of his earliest drawings still adorning the wall at his mom’s place depicts an Indian riding a dinosaur. 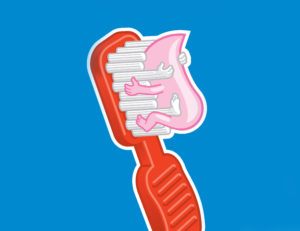 Do you want to know more about Christoph Niemann? We highly recommend the Netflix documentary, where an episode of Abstract – the Art of Design is dedicated to him.